Also, however, Ang has a solid background of volunteering in self-sustainable organic farms, as well as horse farms. Through WorkAway and by personal efforts, she has backpacked across Central America and the United States (Oregon, NY State, Mass.) at different periods of her life, engaging in meaningful volunteer work of this nature.

She has theoretical and practical background in clinical and orphanage clowning, having been member to a clowning group called “Burumbún” in San José, Costa Rica and doing personal efforts to practice clowning in diverse settings, as well.

In November 2017, Ang flew to Kenya to volunteer with the National Gay and Lesbian Human Rights Commission (NGLHRC) in Nairobi.

There, she helped with the upkeeping of “27,” an art exhibit by the NGLHRC that explored the conflict between Kenya’s 2010 Constitution and the lived realities of LGBTQI+ persons in Kenya.

Thereafter, she volunteered with the Makuyu Education Initiative (MEI) in a rural town of Kenya called Makuyu. For MEI, she spent 2 weeks living with the children in their orphanage, teaching them mathematics, English, playing with them and overall learning from them and growing. 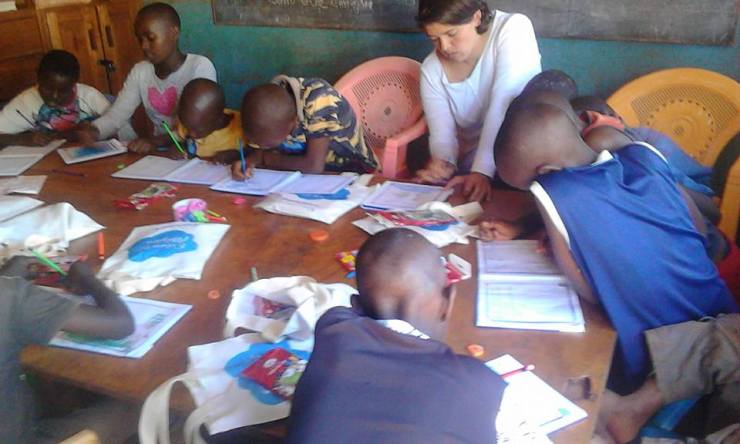 After Makuyu, Ang headed on her own to Inua Mimi Rescue Center, another orphanage that is located in what is commonly named “one of Africa’s largest slums.” For the time spent in Kibera, Ang made efforts to bridge Central American funds from friends to engage both orphanages for which she had volunteered in a social and recreational setting.

Back in the US, but having flown South into Rockport, Texas, Ang went down to join All Hands and Hearts in their efforts in restoring houses for victims of hurricane Harvey. This was about a year after the hurricane hit! Ang was even first-hand help to a recent storm that hit the coast as they slept comfortably in her communal dorm’s lower bunk waiting for the next sunrays to hit.

Back in Boston, Ang is waiting for her wife’s graduation. In the meantime, Ang has volunteered almost all of her time to serving as English to Spanish interpreter for immigrants in the MetroWest area. She has volunteered for the MetroWest Free Medical Program in Sudbury, for Casa del Trabajador and MetroWest Legal Services in Framingham, having done mostly legal and medical interpreting – and some joking on the side to vent the steam off a bit.

As a crossing of all these experiences, Ang is now also co-owner of an LGBTQI+ safe space. Along with her spouse, they are working towards building a self-sustainable organic farm that will function as a cultural and arts center in the Caribbean territories of Costa Rica by 2020.

Interested in volunteering? Whether to help Ang out with anything and almost everything at all, or whether you would like to be connected with any of the projects of which you have read above, please feel free to drop angazofeifa@gmail.com a line. They, again, will be thrilled to hear from you.